The City of Talent is in the final stages of adoption of its revised Park Master Plan and your input on the plan is needed.  Many understand the benefits of Parks and Recreation Master Planning and understand the relationship between community parks and recreation services, economic development, and quality of life.  The master planning process enables local governments, like the City of Talent to assess recreation needs and interests of community members. It enables decision makers to prioritize resource allocation decisions for new facilities and rehabilitation projects, programs, and services in a manner that is fiscally responsible, environmentally sound, publicly supported, and politically prudent.  In addition to providing a design blueprint for facilities, the master plan can be used as a promotional document to foster support and political involvement.  A master plan can also go a long way to support grant request and community donations. A successful master planning process will transform a communitys vision into tangible plans to create outstanding recreation opportunities, well-maintained facilities, and a customer-focused and responsive park system.

Having a great park and recreation system is the hallmark of a vibrant community, a trait which is witnessed daily by citizens in municipalities across the country and Talent is no different. In Talent assets such as Chuck Roberts Park with tennis and volleyball courts, a community water park and natural trails, not only provide hours of entertainment for children, they are a part of the good life in this community.

This Parks Master Plan is an update to the previous Parks Master Plan adopted in 2006. Talent has experienced significant changes since the adoption of the earlier Master Plan, and this draft has been revised to reflect current community choices and opportunities related to renewed economic development and downtown revitalization efforts, including the development of Suncrest Park.

A Parks Master Plan is a document that guides City elected and appointed officials, management and staff when making decisions or taking actions regarding planning, acquiring, developing or implementing parks, open space or recreational facilities. The Plan is intended to be updated periodically to remain current with the communitys recreational interests.

This Parks Master Plan creates a vision for an innovative, inclusive and interconnected system of parks, trails and open spaces that promotes outdoor recreation, health and environmental conservation as integral elements of a thriving, livable Talent. The Plan establishes a path forward to guide the Citys efforts to provide high quality, community-driven parks, trails, natural areas and recreational opportunities across Talent.

The Parks Master Plan reflects the communitys interests and needs for parks, recreational facilities and trails. The planning process was aimed to encourage and enable public engagement in the choices, priorities and future direction of the Citys park and recreation system.  Through a very extensive public process, the Parks Commission developed, with the assistance of the Community Planning Workshop team from the University of Oregon, a comprehensive update to the City of Talent Parks Master Plan.  The Plan project team conducted a variety of public outreach activities to solicit feedback and comments, in concert with a review of the recreation system inventory, level of service review and the current and future needs assessment.

Current community interests surfaced through a series of public outreach efforts that included open house meetings, stakeholder meetings, online engagement and website content. An assessment of the park inventory became the basis for determining the current performance of the system to potential standards for parks. An overarching needs analysis was conducted for recreational facilities, parks and trails to assess current demands and project future demand accounting for population growth.

To guide the implementation of the goals of the Plan, a list of improvements was developed with a set of strategies that identified planning level cost estimates and potential funding sources. Together, this process is represented in the master plan document, which was reviewed by the public, Parks Commission and is now under review at the City Council. Once adopted, the Plan will assist in the development of the Parks Element of the Citys Comprehensive Plan, and direct park system improvements and service delivery for the next 20 years. The draft being presented to the City Council reflects the recommendations of the public and Talent Parks Commission.

While level of service is a good quantitative metric for evaluating a Citys park system, a service area analysis was also completed to provide a more spatial understanding of how residents are served.  The service area analysis established a ¼ mile buffer around existing park and play sites with active recreational amenities like playground equipment.  The analysis determined that residents in south Talent have less access to parks than other residents and that lack of play structures and other active recreation facilities in central Talent leave multi-family housing units and low-income families disproportionately underserved.

Another component of the master plan included an inventory of existing parks, both developed and undeveloped.  Several key themes were determined from the inventory and public input.   Successful implementation of a park master plan requires a commitment by the City to ensure funding is available now and well into the future, both for infrastructure improvements and for the operation and maintenance funds necessary to sustain the parks once development is complete.

The city hired the firm of Hansford Economic Consultants (HEC) to conduct a financial analysis of the draft Master Plan to estimate what funding levels would be needed to be to pay for the improvements currently recommended in the draft Parks Master Plan. HEC looked at approximately $4 million in improvements in todays dollars, including recommended land purchases, and then inflated those cost estimates to calculate for inflation costs over the life of the plan. Tables B-1 and B-2 in the appendices of the financial analysis detail the estimated capital improvement costs and provide potential funding sources.

Current Park SDCs are $1,782 for each new single-family home constructed in Talent, while multi-family units and mobile home park units incur an approximately $1,200-1,300 charge. HEC modeled three different scenarios in determining how much SDCs would need to rise in order to pay for the improvements recommend in the draft Plan. The first scenario assumed all projects in the proposed draft would be implemented, the second scenario assumed only Phase 1 of Suncrest Park would be constructed, and the third scenario assumed that neither Phase 1 nor Phase 2 of Suncrest Park would be constructed. The resulting potential SDC increases for each scenario are shown in the table below.

Park System Development Charges (SDCs) are imposed on new development to meet the increased demand for parks resulting from the new growth. The 2006 Park Master Plan, while thorough, didnt include any major projects and was adopted after the Park SDC adjustment in 2005.  It didnt take into consideration the projects proposed in the 2006 Park Master Plan.  The 2001 plan used to calculate the SDCs included only $303,458 in capital projects, $100,000 of which was allocated for the development of Suncrest Park.  The SDCs were also based on the 1990 census data and population projections.  Considering that SDC calculations are based in part on capital projects and that very few capital projects were proposed in the plan, the SDC rate in 2006 was calculated and approved at a rate of $1,402 per single family dwelling.

Since 2006, the Park SDC has increased only by the rate of the Construction Cost Index (CCI) and resulted in an increase of $302 (or 21%) over the 14-year period.  While using the CCI is appropriate for yearly increases in the SDC rate, it doesnt take into consideration the Citys actual increase in operation and maintenance costs and doesnt provide a means for increasing the level of service to serve a growing population.  The master planning process is the appropriate means of updating the rate structure and best positions the City to obtain future acquisition and development financing from residential development. The City should prioritize the usage of Parks SDCs to secure new park properties and finance park or path/trail development consistent with the priorities within this Plan.

In addition to revenue from SDCs that comes from new Talent residents, parks are also funded by current Talent residents through a $5.00 monthly Parks Fee on their utility bill. This fee is intended to pay for capital improvements to existing parks as well as parks operation and maintenance costs. Of the $5.00 fee, $4.00 is slated for O & M, and $1.00 is designated for capital improvements. HEC modeled four options for needed utility fee increases in order pay for the improvements recommended in the draft plan. Those options are:

 Option 1 - Improvement costs greater than revenue generated by $1.00 of the parks utility fee per month per EDU is debt-funded.

 Option 2 - The monthly fee is increased by 50 cents every year and the remaining unfunded capital costs are debt-financed.

 Option 3  The monthly fee is increased by $1.00 every year and the remaining unfunded capital costs are debt-financed.

Parks utility bill fee increases under each of the four options are illustrated in the table below.  City staff recommended Option 1 as the preferred option.  This options has the least impact on residents in the City while providing the revenue necessary to fund the proposed projects over the 20 year planning period. 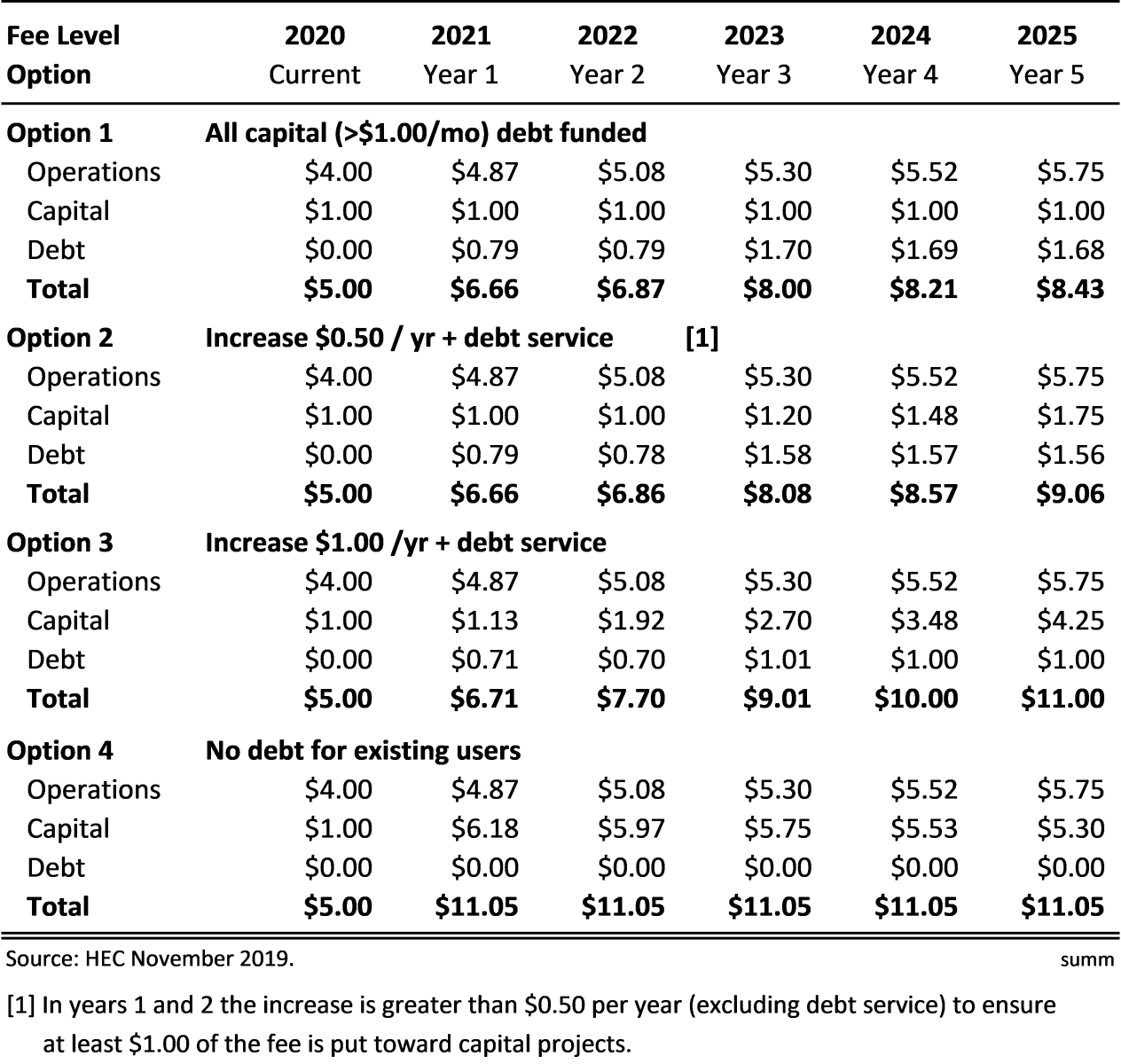 The City recognizes that the vitality of a community is directly correlated to its quality of life and that a strong component of a communitys vitality is in the quality of its parks and recreation amenities and services. This project was initiated to facilitate a community planning process that would create a revised long-range master planning document for the City of Talent to help guide decisions related to providing parks, recreation and open space opportunities. This planning process has provided the City with the opportunity to articulate its vision for these services and provides a framework of action plans for implementation during the next 20 years.

We are asking groups and individuals to take a look at the plan and provide input on the project at the upcoming City Council meeting on August 19, 2020 at 6:45 PM.  The Parks Commission and City Staff believe that this a well thought out plan and that the costs associated with the improvements proposed are in line with the need of the community.  Improvements as part of this plan will help Talent remain the vibrant, environmentally sensitive community it has strived to be in the past several years.

The Master Plan and Financial Analysis is available for review by clicking here.   If you would like to provide written comments, you can do so by emailing the City at publictestimony@cityoftalent.org.  Additionally, you can participate electronically via Zoom by using the link on the August 19, 2020 City Council agenda.  If you have any questions about the plan or funding mechanisms that support the plan, please feel free to contact me directly at zmoody@cityoftalent.org or by calling 541-535-7401.